The Stuff Dreams are Made of

…well sort of if your dream is to sell your home, buy an RV and go on the road. We finally made it out of Denver late afternoon on Monday May 24 but due to high winds and less than ideal weather conditions, we only drove to Chief Hosa campground just west of Denver. It is a pleasant little park that is part of the Denver Mountain Parks system. For the first night in 5 days we slept well without the nervousness of being stranded in a parking lot or worrying about a truck. Bright and early I got up to walk the dogs through the pine trees before we showered, dumped (waste water that is) and were on our way.

Old BLU was fantastic. We eased up the passes without any trouble. Wow! This truck wasn’t even stressed at the thought of pulling our trailer over Vail pass at 10,660 feet elevation. The engine brake kicked in and we glided down without any issues on dry roads under blue Colorado skies.

We have signed on as seasonal employees of the city of Rifle and are parked next to Rifle creek at the camp host site in Rifle Mountain Park. Oh, it is so lovely to hear only the creek and nothing else. Now, this is our dream! We did two laps on 80 Feet of Meat (for those who don’t know, it is a rock climb that most do as a warm up here in Rifle Mountain Park) and now Tony is whipping up a tasty dinner of migas. This was preceded by a celebratory champagne toast to camp hosting and dreams (thank you Martha and Gregg!).

Back to BLU. The name makes me think of a blue tick hound which is contradictory to the pretty blue paint job and more analogous to Babe the Blue Ox. Anyway, the main reason for buying BLU is that it was set up from the factory for a 5th wheel hitch which enabled us to get out of town quicker. We sold the almost new B&W companion hitch in hours after posting on Craigslist. BLU is a 2011 Ford F350 Super Cab long bed Lariat trim truck. It is excessive in a different way than BAT and is a very comfortable ride. As of now we are happy with the power and handling that BLU offers after pulling over 2 high mountain passes. With less than 200 miles on the truck when we headed out of town, we took it easy and just let everyone in zippy cars zoom past. Well, there were a few semi trucks that thundered past, but BLU didn’t take offense.

Shiny new bolts and glue for your next run up Climb-a-Dime-a-Ding-Dang….

This was from a couple of years ago, but it still makes me laugh.
Posted by Tony at 10:24 AM 1 comment: 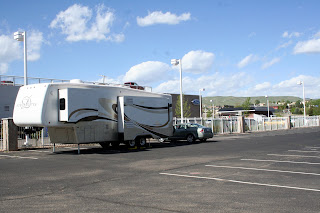 Some have asked what plush accommodations do you get when you live on the road and your puller is in the shop.

Above is our plush RV and the hail damaged, beat up loaner car with the Ford dealership in the background. I attempted to hook the RV to the car, but the hitch wouldn't.

The start day for our ultimate trip had finally arrived, but it was not to be May 19.
The truck decided that it didn’t like to pull the 5th wheel up the mountains.  It told us this twice in definitive terms.  We have had this truck (it was named BAT for Big Ass Truck) for just over a month.
The first attempt progressed almost to the Lookout Mountain exit on west bound I70 before BAT started sputtering, coughing and lurching—screaming “Uncle!”.  Engine lights flashed, the turbo failed and the max speed plummeted to 25-30 mph.  I glanced over at Peggy and we limped back down the mountain to the closest Ford dealer.  They repaired the issues overnight and sent us on our way.  A quick fuel top-off and away we go for Attempt Number Two (ANT).
Regretfully ANT didn’t go as well as attempt number one.  That is hard to fathom but true.  ANT lasted exactly 9.5 miles two of which were running for that top-off and hitching the Mobile Suites.  Our expectations were high and optimistic as I called the Rifle Mountain Park Director to let him know we would be there late afternoon.  As the phone call was disconnecting so did the truck.
As I pressed the accelerator to reach highway speed on the I70 on-ramp, sputter, cough, warning lights…
”Oh crap!”
Avoiding even getting on the interstate our rolling smoke stack just continued off the exit.  As the amount of blueish smoke increased the speed decreased.  The drivers behind us scurried past and the truck crapped out just as we made it to the shoulder.
Have you ever been stranded alongside the road?  Make that a three lane high speed state highway populated with texting, surfing and distracted drivers.  Not pleasant.
Call the service tech.
Call the roadside assistance.
Wait, wait, wait.
Then just as we decide the tow truck company has abandoned us to fry like road pizza, they pull up with the wrong type of truck.  Then back to the wait loop.  Once the second truck arrives the real fun can begin.  Fun in this instance is unhitching the 5er just millimeters from the high speed texters as the tow truck drivers point and laugh.
Back at the service ranch they see us walking in and in unison turn on their heels to execute that urgent task they just remembered.  Peggy executes the best shoe string diving tackle, pins him with an umaplata and we start writing up the service ticket.  I type as Peggy coaxes instructions from Techy.  The word from the mechanic was up to 3 weeks to repair and that at least 2 pistons were melted back to ingot.  Turns out the previous owner neglected to undergo routine maintenance and the motor suffered and well, died when we put it under load.
As you can imagine, confidence in the truck has dropped to depression era levels as we tour the stock of shiny new trucks.  It took a couple of days of gut wrenching debate.  Do we keep the truck?  Should we get a new one?  And on and on.
The final straw was the test ride in the sparkling 2011 Super Duty Lariat with cooling seats (more on the cooling seat later).  It was an agonizing tug of war that ends in the purchase of Blu.  We should be in Rifle next week…already or finally as long as there is not another false start.
Posted by Tony at 4:13 PM 1 comment:

My last day with Level 3 Communications is Friday May 14, 2010. It will be 11 years and 6 months to the day since my first day at Level 3. The adjustment to being unemployed will be interesting as it has been 15 years since the last time I was without employment. The difference this time around is that unemployment is voluntary and I'm not stressing about the urgency to find a new job right away. I am really looking forward to the opportunity to relax, get strong and fit, meet new people, see new places and enjoy life with Tony and the dogs. It feels good to begin the dream we've had for many years.
Posted by Peggy at 2:42 PM 2 comments: