Thank you Paul for taking photos! 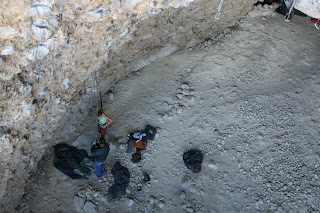 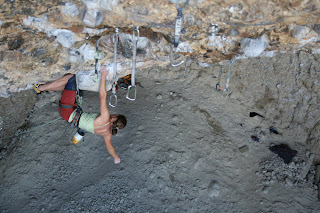 Well, today I did 3 warm up routes and 2 burns on La Confienza. Both times I fell toward the top moving off the big cobble and going to the pocket. I'm very happy with how I felt and climbed today.

I remembered the sneaky kneescum beta down low to make a move easier and grab a quick shake. Big progress for me was to skip one of the clips in the bulge. It was committing, but I believe it saved me some energy. Plus the rope ran differently and it wasn't in my way when getting the left kneebar after the bulge. 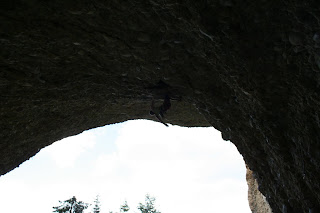 After leaving the double kneebar, the route traverses for a few moves. I realized the second time on route that I wasn't moving efficiently and I felt more tired than I should have when reaching the big cobble. I need to remember to move quickly through that section.

The reason I fell moving off the big cobble is that I didn't have my 'grrr' on. When I fell the second time, I realized that I wasn't pulling in enough with my right arm as I stabbed to the pocket. I got back on and made a conscious effort to pull in and back to get my body closer to the rock. This proved successful and I made the last powerful moves to the anchor. 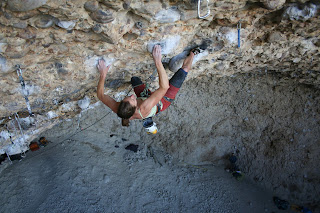 When we were leaving today, Livan made a comment about the route she had just fallen from. She said that she had to almost 'get angry' to power through some moves high on her route. It clicked with me that I was keeping myself too calm and relaxed before heading into the last moves. Tony also made similar statements to me and suggested that I need to determine how to get psyched to pull hard. 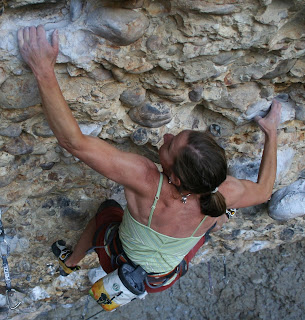