Day 4: I was warmed up, I was focused and I maximized the rests. Per the previous day's finding I was able to get myself psyched up and got my 'grrr' on to leave the big cobble. A big yell and sideways move into the pocket. Tighten the core, heel hook next to the right hand and grab the slopping cobble. Stabilize, give a good grunt and grab the good part of the next cobble with the right hand. Keep the heel hook, flag the left foot and grab the next bad cobble with the left hand. Pull hard, keep the core tight and move the left foot into the pocket, right foot onto the spike by the last bolt. Keep it tight! Focus...grab the final hold with the left hand, really bear down and keep it tight, move the right foot into the pocket...miss. AAARRRGGH! Nothing but air. I fell with my hand on the final hold and missed the stab into the pocket with the right foot. Next time up, I fell leaving the big cobble because I was just spent from my first attempt. I did however, find an alternative foot from the pocket so I don't have to be so precise. After a rest day I will send!

Day 5: Yesterday was a rest day, so today should be good. Utter failure. For the life of me I cannot repeat my efforts from Tuesday. It is hot and I only gave it one attempt. I did however, feel that the next day would be better. We decided to wait until 2pm to start with the warm ups. This meant that we would arrive at the Pipedream after 4pm and hopefully it would be cooler.

Day 6: Excellent late start. I did two routes at the Minimum crag to start the warm up. When we arrive to the Pipedream, I did a nice little 5.11d, Excavation to finish the warm. Then I got in line for my route. My route, La Confienza shares the start with two other routes, plus many extensions. Plus, the anchors are share with a couple routes as well. This means that if the cave is busy, there is some line jockeying to ensure that those attempting to redpoint have a clear run to the anchors.

I felt pretty good, a little tired from the previous day, but a manageable tired. I felt good at the cobble, and got psyched. Set up, stab left for the pocket. Came up sort! Great anger and I am embarrassed to admit, profanity. Not a good thing. What had I done wrong! Why??? I was incredibly discouraged. I pulled up to the bolt and just hung there with tears threatening. All sorts of raw emotion were just boiling inside. I had sent the route just days earlier, but fell at the anchors (which of course doesn't count as a send!). I grabbed the big cobble, but something just didn't feel right. There had been a nagging thought just before I fell, that I wasn't set up right. Still, I Tony take and I hung some more contemplating the rock. I again grabbed the big cobble...oh my goodness! I had my hands position incorrectly putting my right hand to far right and making the move left to the pocket too long. What a stupid mistake! I pulled on and made all the moves to the anchor and lowered dejected.

I did give it another attempt, but fell low. I took the opportunity to finish the route, but take frequently to try some new beta and solidify the known beta. It is good to keep the mind open to changes and try new ways of doing a move. I will not come back to this route for until our next trip to Maple Canyon. This is OK as it was time to walk away for a bit and do some other climbs.

Epilogue: I finished the time here in Maple on a high note today. After some easy warm up routes to work out the soreness and exhaustion, we went to the Cragenmore wall. I onsighted 5.12c! A route named Popcorn. Today was our third day on and I had to dig pretty deep and am very happy.

We leave this canyon more fit and strong that we have been in some time. I may not have been able to claim a redpoint on La Confienza, but I am stronger and smarter as a result of my time on that route.
Now, for a few days of relaxing and mountain biking near Park City. Then onto limestone pocket pulling in Wyoming. 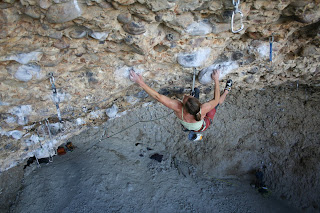 The move left to the pocket that was giving me problems.
Posted by Peggy at 5:24 PM